The Samsung Galaxy 551 is a recently released handset from Samsung that offers impressive levels of technology within a stylish casing. The handset is a compact unit which measures 111 mm x 55 mm wide whilst being 15 mm thick and weighing in at 156 g.

Samsung Galaxy 551 comes with an impressive 3.2 inch display screen, which is TFT capacitive and offers touch screen functionality. The display screen is able to display up to 16 million colours within a 240 x 400 pixel screen resolution. The handset also utilises the touchWiz user interface, which within this unit is version 3.0 whilst also providing a useful accelerometer sensor for the automation of image aspect orientation.

The Samsung Galaxy 551 comes with the usual ring and vibration alert options, as well as the ability to utilise MP3 and WAV ringtones, whilst hands-free functionality is provided by the integrated speakerphone. Samsung Galaxy 551 also comes with a 3.5 mm audio jack and a phone book that will retain practically unlimited numbers of entries and offers photo call functionality.

Samsung Galaxy 551 offers a 160 MB internal memory capacity, with the ability to utilise the available microSD card slot to increase its memory capacity up to a more respectable 32 GB. The answer also comes with a range of social networking integration features, as well as Google search, Gmail, maps as well as YouTube and Google talk, in addition to Picasa integration. 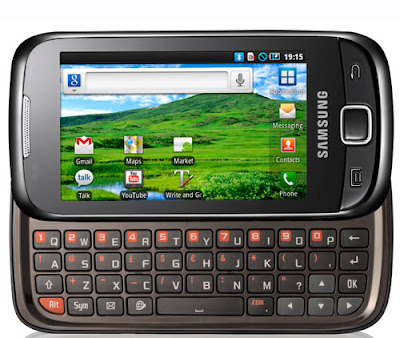 Entertainment is provided by virtue of its multimedia MP4 player, and MP3 music player as well as a stereo FM radio that comes with RDS functionality. The unit also comes with a variety of games as alternative means of entertainment. Photographic capabilities are provided by the 3.15 megapixel camera which operates at 2048 x 1536 pixels and includes autofocus as well as the ability to utilise the same camera for video capture.

The Samsung Galaxy 551 utilises a 667 MHz processor as well as the android operating system, which within this unit is version 2.2. Connectivity is provided by virtue of a variety of connection options which include microUSB, Bluetooth, EDGE and GPRS. The handset also provides Internet access through its Wi Fi and HSDPA connections, while satellite navigation is provided with the benefit of A-GPS support.

The Samsung Galaxy 551, which is similar in many ways to the Samsung S7230 Wave, offers expressive levels of technology and functionality, providing a unit that is sure to be a popular choice with the consumer.